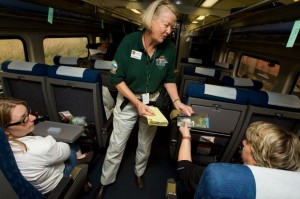 From the North West Indiana TImes

As the Wolverine leaves Chicago’s Union Station each afternoon, passengers  aboard the Amtrak train to Detroit look out their windows at the urban maze of  concrete and steel.

Once the train crosses the Indiana state line, though, skyscrapers soon are  replaced with the natural beauty of the thick forests and flowing sands of the  Indiana Dunes National Lakeshore.

The Maxwells are among about 20 teams of volunteers who board the Wolverine  in Chicago and ride to Niles, Mich., and back three times a week, explaining the  biodiversity of the Indiana Dunes to passengers as part of the Trails and Rails  program.

Ranger Bruce Rowe said the program, which has 19 routes canvassing the  country, started locally this summer.

“It is designed to give passengers on these trains a chance to explore a bit  of the Indiana Dunes National Lakeshore without getting off the train,” Rowe  said.

Shortly after the train departs Union Station, Frank and Ruth Maxwell take to  the public address system, telling passengers to be on the lookout for the  waving grasses and patches of wildflowers that soon will be outside their  windows, and inviting them to learn more about what they’re seeing.

“About 60 percent of the time we’re either in or on the border of the  National Lakeshore,” Ruth said. “Once we leave Hammond, the National Park starts  in bits and pieces.”

Frank, a train enthusiast, and Ruth, a former teacher and nature guide, said  the program was a perfect fit for them in their retirement. Living in the Porter  Beach area, the Maxwells said they’re happy to help bring the joy they’ve found  along the lakeshore to others.

After passing the station in Hammond’s Robertsdale neighborhood, Ruth, who  worked at the Environmental Learning Center taking kids on hikes through the  park, begins working the Wolverine’s five cars, handing out brochures about the  Dunes and giving children an activity sheet and crayons.

“We have a special Junior Ranger program for them,” she said.

Frank stays back in the cafe car and greets people on their way to grab a  quick bite.

After stopping by and talking to Frank, Troy Grivet, an engineer from  Jackson, Mich., on his way to Chicago, said he’d consider bringing his family to  the Dunes to camp and hike.

“It’s just a good place to go to have some fun and enjoy nature,” Frank  said.

The Trails and Rails program is set to run again on Tuesdays, Wednesdays and  Thursdays from Oct. 11 through Oct. 20. Travelers will be able to see fall  foliage, as leaves change from their rich greens to deep autumn hues.