From the Wall Street Journal 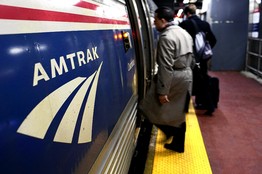 Amtrak’s financial losses are projected to widen this year despite rising ridership, the top executive of the government-subsidized rail system said Tuesday.

Amtrak ridership, up 9.9% in April, has climbed 18 consecutive months.

Amtrak blames the red ink on rising compensation costs for union workers and increased costs for fuel, materials and other expenses. Amtrak is making money on its heavily traveled Northeast Corridor between Boston and Washington, serving mostly commuters, executives said. But money-losing, long-distance routes are a drag on the bottom line, Amtrak says.

Amtrak officials project an operating loss of $506 million in the fiscal year ending Sept. 30, up from a loss of $419.9 million last year. Officials have projected a loss of $616 million next year.

Ridership has increased for 18 consecutive months—including a 9.9% rise in April from a year earlier—and is on pace to eclipse last year’s record 28.7 million passengers. Officials attribute the increase in part to passengers drawn to the railroad by higher gasoline prices.

Amtrak’s financial losses have made the rail system a target of Republicans who say the corporation wastes taxpayer dollars. Federal subsidies cover about 16% of Amtrak’s operating expenses, which are projected to total $3.94 billion this year. That money fills the gap left by Amtrak’s operating loss.

“I don’t understand how you can be serving more passengers than ever before” while losing more money, Sen. Susan Collins (R., Maine) said in a question to Amtrak President Joseph Boardman during a hearing Tuesday on Capitol Hill.

Those trains provide an important public service in areas that have few other travel options, Mr. Boardman said, including serving a disproportionately high percentage of Amtrak’s disabled riders and reducing car-traffic pollution and congestion.

The long-distance trains connect major urban centers and also serve many areas that lack major airports or bus service. Those routes have the support of many influential lawmakers whose constituents they serve.

Amtrak, which was created by Congress, also receives annual appropriations for capital projects.  It recently won $450 million from the Federal Railroad Administration, mostly to upgrade a 24-mile segment between Morrisville, Pa., and New Brunswick, N.J.

Amtrak spokesman Steve Kulm said Amtrak continued to work on ways to raise revenue, including adding services like Wi-Fi to attract more riders, while making moves to cut costs, such as making its trains more energy-efficient. But he said the long-distance routes would continue to lose money.

“The Congress and this country need to make a policy decision: Do they want intercity long-distance trains or do they not?” Mr. Kulm said.

Cutting long-distance service would likely face opposition from lawmakers in the affected areas.